Canadian conservative thought is rooted in British Toryism which believes in traditional national principals, social cohesion and order. It can be argued that the first Black Canadians to subscribe to this political philosophy were the Black Loyalists. These were people of African descent who sided with and fought for the British Crown during the American Revolutionary War (1775–1783).

Black Canadians came to Canada in various waves of immigration. This includes former enslaved African-Americans that came to Canada via the Underground Railway. Particularly after 1967*, with each new wave of migration to Canada, Black immigrants, primarily from Africa and the Caribbean, were often from countries that were former French and English colonies. So, many Black immigrants had conservative political values that were similar to those that could be found in Quebec and the rest of Canada. These conservative values include fiscal conservativism, opportunity, self-reliance, faith and family. Moreover, many Black Canadians came to the country to escape political tyranny and economic injustice that is the antithesis of conservative tenets such as: respect for the rule of law; robust capitalism; fairness; and personal freedom. Haitian-Canadian medical doctor, the first Black Canadian elected mayor of a Canadian municipality and a former national director of the Progressive Conservative Party of Canada. Developer, lawyer, appointed by Prime Minister Brian Mulroney to the Senate of Canada in 1990 and served until 2013. Social worker and pioneer of the protection of women regarding domestic violence, former member, the first Black member and the longest serving member of the Senate of Canada. Former Member of the Legislative Assembly of Alberta, and the first Black cabinet minister in Alberta (Minister of Culture and Community Spirit). 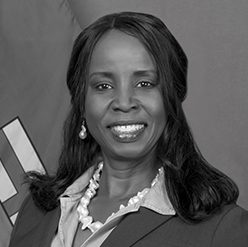 First Black Member of the Legislative Assembly of Manitoba, the first Black cabinet minister in Manitoba (Minister of Mental Health, Wellness and Recovery).

The Association of Black Conservatives (2019) was founded to build upon the successful history of conservative Black Canadians. It is our aspiration to assist with broadening and deepening the base of the Conservative Party of Canada and provincial conservative parties.

ABC believes in advancing the principles of equity and inclusion for the Black Canadian community and all Canadians. We aim to foster greater civic and political participation in the Black community. By expanding and diversifying the base (increased members, volunteers, and donors) within conservative parties, more perspectives will contribute to stronger and better policies.

The immigration regulations introduced in 1967 established a new standard for evaluating potential immigrants. To create a more objective admissions process, a system was introduced through which independent immigrants were assessed by points in different categories in relation to: occupational skills; education; employment prospects; age; personal character; and proficiency in French and English. Through this system, Canadian immigration became more diverse and set the stage for multiculturalism in Canada.